There was silence. Journalists stopped writing. Cameramen lowered their cameras. The air in the room became still as everyone looked on in disbelief. Can it be true? What will we write about if there is no maize shortage? Does this mean that, right now, no Kenyan is going hungry?

Esteemed guests and media personnel imagined what it would be like if the country was food secure. In their mind’s eye they saw international aid agencies dusting off their passports in preparation for departure to places in need of food relief or financial support. They pictured families in Kilifi and grannies in Turkana having wholesome meals three times a day. They pictured a farmer with a small shamba having money left over at the end of the month, because she earned a fair price from the sale of her sukuma wiki. They saw pastoralists moving freely over the land, with strong and healthy cattle in tow. They believed that on the drive home, they would not see one man, woman or child begging for food.

The announcement during the recent Agricultural Summit held at State House contradicts the reality of food insecurity in the country. Food security means that “all people, at all times, have physical, social and economic access to sufficient, safe and nutritious food to meet their dietary needs and food preferences for an active and healthy life” (FAO, 2002). The same definition has been adopted in Kenya’s Food Security Bill (Draft), 2014.

If Kenyans are food secure, it means that everyone in the country can access safe and healthy food of their choice, in quantities of their choice – whenever they are hungry – either because they bought food or because they produced food themselves. This is far from being the current situation. Out of a population of 47 million people, more than 10 million people suffer from chronic food insecurity and poor nutrition (Kenya National Food and Nutrition Security Policy, 2011). It is estimated that between two and four million people depend on emergency food aid at any given time (KNFNSP, 2011). Nearly 30% of Kenya’s children are classified as undernourished (KNFNSP, 2011). Kenya is ranked 83rd out of 113 countries on the Global Food Security Index (GFSI, 2016).

Why then, is the Government of Kenya claiming we are food secure, if we clearly aren’t? The elephant in the room (that was dutifully silent during the State House Summit) should trumpet out loud to say that it’s a game of politics. If the Government – its policies and practice – have delivered food security to Kenya, then it means they have changed a long-standing feature of the country’s history in a significant way. In an election year, this is a powerful narrative, particularly if it makes Kenya attractive to foreign investment or if it means winning the election.

The discussion at the recent Gender Forum is an example of the counter-narrative to a statement saying Kenya is food secure. Through a conversation about The gender dimension of food security it was evident that much still needs to be done before we can claim that everyone has access to food and that adequate food is available to everyone. Kenya has enough food. The problem lies in how food gets to the table and whose table it needs to get to.

During the forum, several aspects of the food value chain were addressed. The discussions highlighted familiar talking points amongst civil society actors and the media. To name a few, structural issues such as limited transport infrastructure and market access, exacerbated by poor post-harvest storage facilities, lead to high levels of food waste or low selling prices to brokers. For poor farmers, this means food for subsistence can be unfit for consumption or limited in terms of nutritional value, and the opportunity for earning a profit from the sale of produce is undermined. It was clear from the conversation that the solution to food security is not only about increasing the production of food, but also addressing how food is distributed throughout the country.

Broadly we can identify five categories of people who are particularly vulnerable to food insecurity (Ombaka, 2014). The first category would be the rural poor – those who own or occupy land, but it is too small to meet their needs or of too poor quality to produce adequate food. The second category is people living on marginal lands. Primarily pastoralists, this category includes those who live on arid or semi-arid lands whose livelihoods and source of income or sustenance have come under increasing pressure. The third category is the urban poor – those who earn too little to afford sufficient quantities and quality of food. The fourth category is pregnant and breastfeeding mothers who for one reason or another do not have enough food to eat or are unable to acquire food. The final category is young children, whose mental and physical development is dependent on full and adequate nourishment. The 10 million people that suffer from chronic food poverty comprise of these “categories” of people. It is therefore essential that approaches to achieving food security in Kenya are inclusive and consider the social and economic participation of these groups for the solution to be viable and sustainable.

Constituting 80% of Kenya’s farmers, women are the cornerstone of small-scale agriculture, farm labour and daily subsistence. Participants at the Gender Forum highlighted the unique challenges faced by women in agriculture, particularly limitations in land ownership due to cultural practices and insufficient access to credit. Various potential solutions were discussed, most notably the need for strict compliance with the constitution that outlaws gender discrimination in property ownership.

The place of research and innovation in solving perennial challenges in the agricultural sector was also highlighted. One of the panelists argued that research has an important role to play in the agricultural space since new technologies and techniques of production that increase productivity are developed through research. Another perspective voiced during the forum was that – as Africans – we have decided that science is not for us and we have assumed that we are only consumers.

What is not in doubt is that Kenya boasts some of the best agricultural researchers in the world. However, they are faced with a myriad of challenges such as low and unpredictable budgets, poor representation of women in research and decision-making positions, limited direction on which research topics are the most useful and relevant to farmers, and a situation where the outcome of research does not filter down due to lack of extension services or innovative communication opportunities. We should be proud of the fact that we have the technical expertise to carry out research and it’s time we make the investment to unlock home-grown innovation.

It is difficult to make sense of a situation when we are exposed to different stories being narrated by people we should trust. You may ask yourself, who am I to question Kenya’s leaders? At the same time you might find yourself wondering why you should disbelieve stories about manipulative cartels, poor farmers being exploited or children going hungry. It is important to be aware that there can be a gap between the stories we are told and the stories that are true. This may seem obvious, but it is powerful. Awareness gives us the opportunity to scrutinise what’s being said. And if we are able to think critically, it empowers us to make up our own minds about the truth.

This article was authored by Layla Liebetrau, Project Lead for The Human Right to Food Initiative (HRFI).

The Environment Forum on GMOs is a public platform to encourage the debate on issues of food security and to exchange knowledge among citizens and experts to inform the policy making process. 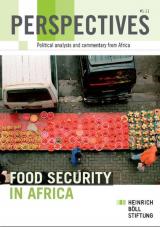 One of the biggest challenges predicted to affect food security in Africa is climate change. Due to the fact that 95 percent of Africa’s agriculture is rainfed, the already fragile agricultural sector is extremely vulnerable to climate change. Highertemperatures and an increased frequency of extreme weather events, such as droughts and floods, eventually lead to a decline in agricultural output.