Article
Civil society has always played a key role in Sudan’s long ongoing struggle for political reform and the National Congress Party, which has ruthlessly clung to power for nearly 30 years, is cognisant of this.     Very few political analysts could have predicted what has transpired in Sudan over the past four months. On 19 December, a small protest ostensibly over a treble price hike in bread triggered a domino effect of protests across the country, including in former ruling party strongholds. It soon became clear the initial protests lit a powder keg within Sudanese society, frustrated at 30 years of authoritarian rule with mass corruption and an unwieldy security apparatus --Sudanese citizenry have had enough.

Who Will Wipe Our Tears? – Police Brutality and Delayed Justice in Kenya

Article
Many victims and survivors, together with families impacted by police brutality in Kenya, seldom get justice. Some of these survivors have lived to share horrifying stories of how they have suffered brutal beatings, unlawful arrests, and torture while in detention. Some bear the scars of careless shootings if they are lucky to escape death.

Perspectives Africa is a publication series jointly produced by the offices of the Heinrich-Böll-Stiftung in Africa. With these series, we intend to provide a global readership with an understanding of African perspectives, as well as an analysis of global trends and greater insights into developments and current political issues across the African region. 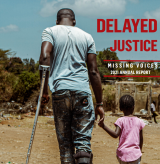 Missing Voices is a coalition of 15 Civil Society Organizations that aim to end extrajudicial killings and enforced disappearances in Kenya. Since its inception in August 2018, Missing Voices has documented and verified data on police killings and enforced disappearances (EDs) and held several campaigns to disseminate our research while pushing the general public to report incidents of police misconduct. These activities are done in partnership with stakeholders with the mission to get justice for victims and survivors and promote police accountability.

Article
On the occasion of the 70th anniversary of the Geneva Refugee Convention (GRC) it seems more important than ever, to bring the Convention’s indispensable importance for refugee protection back to the attention of policy makers and a broader public.

The Kenyan Elite and the Constitution

Opinion
Kenya’s constitutional history did not develop in a vacuum. To understand the recent limitations placed on the powers of the executive by the 2010 constitution, the case for viewing Kenyan politics in the long durée remains compelling.

Article
The repeated postponements of elections have at times caused political tensions and uncertainty. This has undermined Somaliland’s democratization process, weakened public confidence in democracy, stalled institution building and reforms, and damaged the country's relationship with the international community.

Opinion
With 1.3 million registered voters (approximately 30 per cent of the population of Somaliland) expected to cast their votes — with 246 candidates gunning for 82 parliamentary seats and 966 vying for 249 district municipality seats in the six regions — these elections will be the most competitive yet.

Article
The upcoming 6th general elections are yet another historic chance for Ethiopia to hold free and fair elections. Through democratic competition, Ethiopia can avert conflict, strengthen its democratic institutions, and begin the transition to democracy. The elections are a matter of survival.