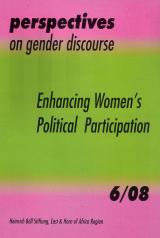 Despite much rhetoric about gender equity, the role of women in Kenyan electoral politics remains dismally low – even by standards of the East African region. The sixth edition of "Perspectives on Gender Discourse", emerging from discussions held at HBS Nairobi's "Gender Forum" in the run-up to the last general elections, takes a closer look at women’s political practice in Kenya from diverse perspectives.