Why Don’t Women Vote For Other Women? Reconsidering Automatic Privilege and Tokenism in Political Processes

Teaser Image Caption
Tanzanians cast their ballots in the presidential election at a polling station in Zanzibar on October 25, 2015.

As Zanzibar gearsup for a rerun of Presidential, Legislative and Local Councils Elections annulled in October 2015, the Regional Commissioner (RC) of Mwanza, Magessa Mulongo on March 8th while commemorating International Women’s Day made some remarks worthy of a response. Mr. Mulongo used a familiar trope to try to explain women’s low numbers in representative structures-elected or nominated: he chastised women for being each other’s worst enemy. Instead of aiding each other’s progress, he argued, women envied each other and engaged in ‘pull her down’ (PHD) antics. In his mind were it not for women’s bitchy behaviour towards one another, women would be ahead in their quest for 50:50 representation in political spaces.

At the same time, Felicia Mabusa Suttle, a black female talk show host in South Africa caused much controversy in South Africa when she spoke about the PHD Syndrome, albeit in the corporate context.  A number of women were quick to question the myth. Dr. Renate Volpe, for example, pointed out that such notions are a political strategy to divide and rule; to create doubt between parties so as to destroy trust.

The term PHD is more familiar in South Africa and the United States, contexts where women of colour have had to rise above sexism as well as the added scourge of racism. It is, however, a term that has also been applied to distance the female voter from the female contestant. Do women loathe each other? Is this loathing so innate in women across time and throughout the world? Could Mr. Mulongo be right given women’s under representation in the public sphere, especially in leadership positions?

Such generalised assertions coming from a high ranking public figure are baseless and careless. Consider Tanzania where the current vice president was not just thrust into prominence by loving male compatriots overnight. Rather, almost three decades ago she was supported by fellow women who had the acumen and audacity to sponsor her training and open doors that would propel her into leadership roles and positions.

Likewise, the former UN Deputy Secretary General and former Foreign Affairs and Justice Minister for Tanzania, Dr. Asha Rose Migiro has been associated with many women professional and political outfits before her appointments. These associations provided her with much needed political capital. Coincidentally, she also conducted one of the few local studies on female political figures in the Tanganyika African Nationalist Union (TANU) and its women’s wing Umoja wa Wanawake (UWT). In fact Dr. Migiro’s rise to politics can be attributed to UWT creating a constituency within their special seats category for women in higher learning institutions, a move that enabled the party to attract highly qualified women who otherwise may have been hesitant to join active party politics.

Mr. Mulongos assertions, supported by women like Ms. Mabusa Suttle, also begs the question: don’t men experience the same animus against each other? The absurdity of generalised notions regarding women’s low performance in certain sectors detracts even from the obvious. Politics is competitive. Can anyone point to stories of devoted love between male politicians in Africa? I do not see Museveni gushing with affection for his former rebel cohorts Kiiza Besigye and Amama Mbambazi: how will Mulongo explain the countless times Besigye has been harassed or manhandled by his war buddy?

The contempt that male leaders show their opponents is ruthless. It is for this reason that a number of East Africans are apprehensive about the newest member of the EAC, the South Sudan. Since her independence in 2011, South Sudan has debuted on a shaky start with the two main protagonists in the post-independence dispensation, President Salva Kiir Mayardit and his sometime Deputy, Riek Machar engaged in what can only be described as ‘a marriage of (in)convenience’. Countless of lives have been lost since the two lost out. So far attempts to broker a truce between the two have not materialised, polarising instead of unifying a fragile nation.

Does Mr. Mulongo think that it is okay for men to fight it out for the leadership because it is the male thing to do while a less rigorous standard should apply for women who are expected to be tame about competitive politics? Is such an expectation realistic considering that politics are dominated by mafia style operatives such that electoral processes have become deadly? Women’s exclusion from public spaces, and particularly the political realm, is systematic and structural and is intensified by attitudes and practices that explain rather than address women’s exclusion from power.

It is disingenuous for Mulongo, a beneficiary of male privilege to avoid engaging in constructive discussions on promoting substantive equality between the sexes. He should take issue with terminologies such as wanawake wakiwezeshwa wanaweza (If empowered women are able) flaunted during political campaigns because they normalise male exclusive privilege in the public space (whether they are able or not) while women’s exclusion is regularised. For generations men have benefitted from automatic entitlement in different spheres. Worthy men would champion the cause of the oppressed rather than speak with disdain  from a position of privilege!

Gender equality is essential to building a democratic culture because of the inherent dignity and humanity of every citizen, male and female, on the basis of full equality. A discussion on tokenism should begin here.

Salma Maoulidi is a public intellectual and social activist with roots in the women's and civil society movement in the region and globally inspired by the promise of freeing human potentials. Currently Salma is a member of a reflection group on Elections and Political Change in East Africa coordinated by the Institute of African Research and Resource Forum (ARRF).

The Heinrich Boell Foundation invites experts working on issues related to our work to submit short commentary pieces for publication on our website. The views expressed in these pieces do not necessarily reflect official positions of the Foundation and should be read as personal perspectives of the author in question. 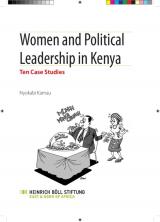 Despite global advances recognizing the principle of women’s political, economic and social equality, Kenyan women continue to be marginalized in many areas of society, especially in the sphere of leadership and decision making.

Out of the eleven elections that have been held in Kenya since independence, the 2013 election will remain significant in Kenya’s electoral history. The Constitution of Kenya 2010 set the legal framework for promoting gender equality, which has seen a record eighty six woman elected and nominated to the eleventh Parliament. This number surpasses the total number of women representatives in the fifty years of independence combined. In the last ten parliaments, Kenya has had a total of eventy five women, fifty of them elected while the other 25 were nominated. With an increase from 9.8% to 19% representation, Kenya is now ranked 76th of the top 100 countries in the World Classification of Women in National Parliaments. The marked

Progress, a result of years of hard work by different stakeholders in the women’s movement, deserves celebration.